May 21, 2012
Former fourth-grade school teacher Kara Laricks won the NBC fashion competition, Fashion Star. Laricks always told her students to be true to themselves, and she finally took her own advice and pursued a career in fashion. She designs androgynous clothing for men and women, inspired by her love of menswear and an avant-garde Japanese design aesthetic. Best known for her hoodie scarves and collar-and-ties, Laricks puts a spin on what is deemed traditional women's fashion. She considers her partner Melissa to be her biggest supporter because she encouraged her to pursue her passion.

Everything She Wants caught up with the designer after her win via email: 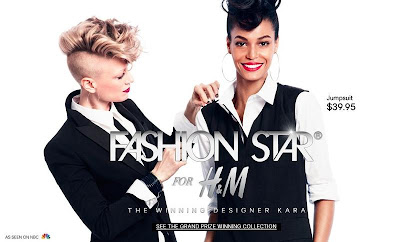 How has Fashion Star changed your perspective of the fashion industry?

Kara Laricks: I have always thought of myself as a "high end" designer -- in other words, one that dreams of creating a mood and experience for my customers through a runway show -- telling a story through my collection with a clear beginning, middle and end each season while always maintaining my signature flavor regardless of trend or decade.  I have always admired the designers/artists that hang in Saks Fifth Avenue and am honored to be included in those ranks.  However, during my time on Fashion Star, I realized the thrill of reaching my customers through more affordable retailers like Macy's and H&M.  Going forward, my challenge is to maintain the integrity of my vision, while making sure my customers get the clothes they want.

What was the most valuable lesson you learned from being on the show?

KL: To be me.  Believe in my vision and design from the heart.

What is your favorite garment that you designed during the show?

KL: No question, the tailcoat on episode 4 for Saks Fifth Avenue. I honestly have not taken it off ...well, maybe to try on the black jumpsuit available now at Macy's.  Wink.  I love that one too.

What was the best advice you received from one of the mentors and/or buyers?  Why was that advice helpful?

KL: Do you.  In other words, they gave me great advice about what sells in terms of color and fabrication, but if my designs don't read Kara Laricks, then color and fabric won't matter.

How would you describe the woman who buys your clothes?

KL: A Kara Laricks woman is unique.  She is willing to take a risk.  She acknowledges and embraces all sides of her personality and style. She may want to throw on a light, airy dress from the Kara Laricks collection for H&M on a hot summer day and then switch to the black tailcoat from Saks Fifth Avenue at night.  She might even throw on a sexy one-piece romper from Macy's in between.  She has her own style and is not afraid to incorporate a menswear inspired detail here and there.  She also knows that it pays to save her pennies for a very special piece and splurge on less expensive trend driven pieces to complete her look each season.

Do you have plans to show a collection during Fashion Week in September?

KL: Showing a full collection during Fashion Week has always been a dream of mine, however, when I do it I want it to be just right.  I'm also a businesswoman and I have many decisions to make in the upcoming months to determine the proper course for the Kara Laricks brand.  Stay tuned...