Mary J. Blige is a survivor. She's not gon' give up. The still reigning Queen of Hip-Hop Soul is also not gon' cry.  She's been through her share of heartache, but the native New Yorker made it clear during her energetic and heartfelt performance earlier this month at Brooklyn's Barclays Center that she's in a good headspace. It appears she's finally found the real love that she's been searching for, and it's self love. 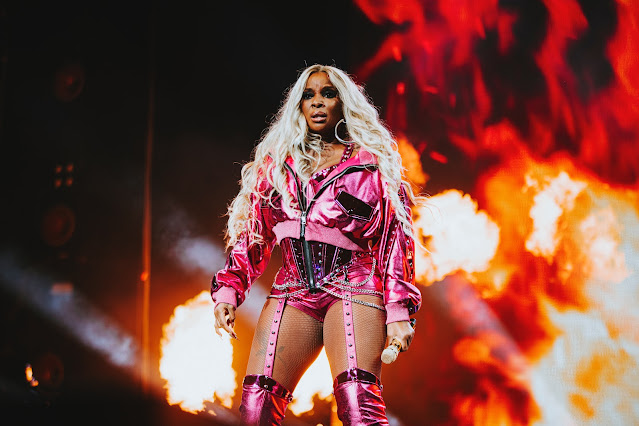 It was also abundantly clear that this Brooklyn audience had a love jones for Mary J. The hype crowd was warmed up by a hip-hop banger set by Funkmaster Flex (in feisty Flex fashion he proclaimed that he wasn't getting paid to DJ, but he was there because he loves Mary) and opening acts Queen Naija and Ella Mai (Mai, who was joined onstage briefly by Babyface, was the more engaging and tasteful pick). But once Mary hit the stage, most of what happened beforehand quickly took a backseat.

Decked out in a cropped yellow jacket and thigh high yellow Louis Vuitton boots with not much else in between, she descended from beneath the stage in a cloud of smoke. With pyrotechnic flames blazing in the background, she emerged to the anthemic song "Amazing." And she did look amazing. 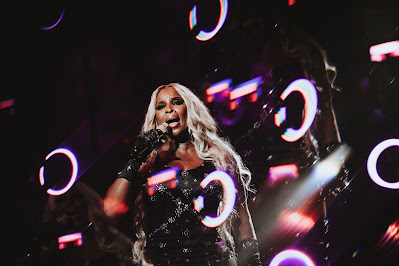 From that moment and for nearly two hours, the captivated crowd sang and danced along with Mary -- our cellphones lighting up the arena -- as she made several fly wardrobe changes, twerked a little and belted standout tracks from her multiplatinum and Grammy-winning catalog. This included hits that spanned her game changing 1992 debut album, What's the 411?, to her triumphant new release, Good Morning Gorgeous.

A few of the nostalgic highlights were "You Remind Me," "Real Love," and Diddy joining his protege in her trademark two-step on the "Love No Limit" remix. Plus, heart-tugging renditions of "I'm Going Down," "Not Gon' Cry," "My Life" and "No More Drama." During the show, Mary gave a nod to jazzy soul stirrer Anita Baker as the band played the melody to "Sweet Love" and she acknowledged there would be no Blige without Baker. A new generation of  R&B singers can say the same about her.