Must-See Play in New York City at BAM: What to Send Up When It Goes Down

What to Send Up When It Goes Down, an interactive play written by Aleshea Harris and directed by Whitney White taps into the gravity of the racially polarized times we're living in.

If Public Enemy's woke anthem, "Fight the Power," were a theatrical work, this would be it.

Presented by BAM and Playwrights Horizons in association with The Movement Theatre Company through July 11that BAM Fisher (321 Ashland Place, $25), I attended a performance of What to Send Up When It Goes Down and a week later I'm still reeling. The evening began with a pre-show lobby experience, an installation of photographs of men, women and children who mercilessly and senselessly lost their lives to anti-Black violence, including Trayvon Martin, Tamir Rice, Ahmaud Arbery, Eric Garner, Sandra Bland and Freddie Gray.  From the outside of the BAM building some of the portraits of Black lives lost are illuminated like saints in stained glass windows. Breonna Taylor is among the lost souls memorialized in the windows, and so are victims whose names have not been prominently hash-tagged or battle cried at protests like Tony McDade, a Black transgender man killed by police in Florida in 2020. 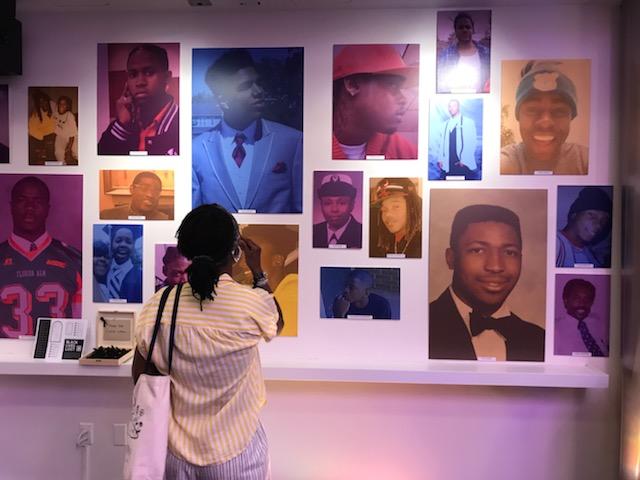 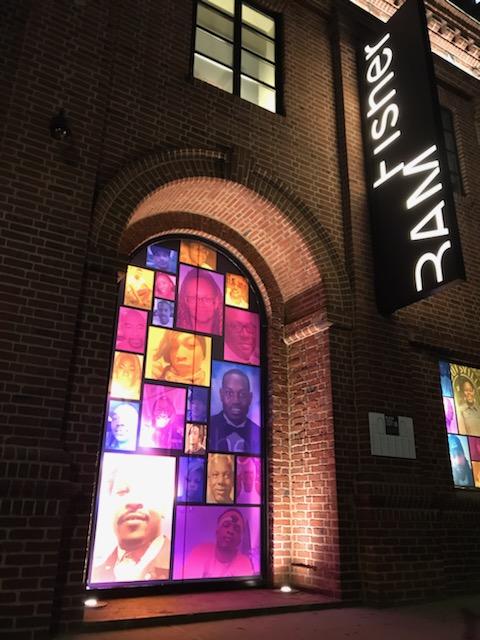 Billed as "a play ritual of release and healing for Black people," the art installation set the tone for the alternately solemn and jubilant two hours that followed.  Before the audience was led into the auditorium, we were asked to put on a black ribbon to symbolize our collective grief and one of the members of the cast made it clear that this was a theater piece for us, by us.

“We are glad non-Black people are here. We welcome you but this piece was created and is expressed with Black folks in mind. If you are prepared to honor that through your respectful, conscientious presence, you are welcome to stay,” actor Kalyne Coleman announced before the audience entered the BAM Fisher auditorium.

Once inside, wearing masks was required for the audience and seating was socially distanced. A circle drawn in chalk marked the main stage area. What transpired was like a sorrowful, vengeance-soaked fever dream, a cathartic cleansing and a celebration of Black pain and resilience. Some Non-BIPOC attendees were visibly rattled by much of the language and subject matter.  That was both intentional and necessary. As a playwright, Harris has given non-Black audience members a glimpse of what it feels like to be the marginalized minority. 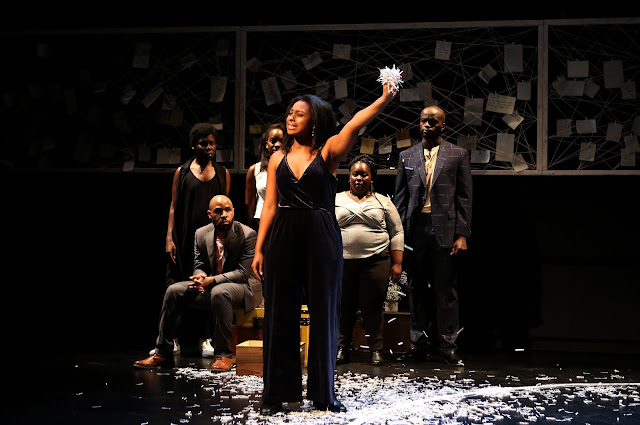 The cast of What to Send Up When It Goes Down./Photo by Donna Ward

During the performance, the stellar cast -- Kalyne Coleman, Alana Raquel Bowers, Rachel Christopher, Ugo Chukwu, Denise Manning, Javon Q. Minter, and Beau Thom -- step danced, sang and acted out scenarios that most Black folks have either experienced or could relate to, like shrinking or being metaphorically “eaten” a little piece at a time in order to fit in with our white colleagues and friends, being oppressed and othered at every turn, and feeling righteously outraged (there’s a play within a play where a vindictive maid conspires against her self righteous “Karen” boss). Scenes were interwoven and themes repeated like a patchwork quilt.

At one point, the actors asked the audience to write a love letter to Black people and to place it in bowls on the stage. And at the conclusion of the show, non-African American audience members were asked to leave so the Black attendees could fellowship together. As the non-BIPOC attendees exited, they were given a few anti-racist references and resources to ponder. One was an “Accountable Apology: A Ritual” by social worker Brianna Suslovic, which read: “What if we made apology into ritual, just as we have ritualized forgiveness? What if our apologies centered on collective healing and justice, instead of centering our guilt and shame?” 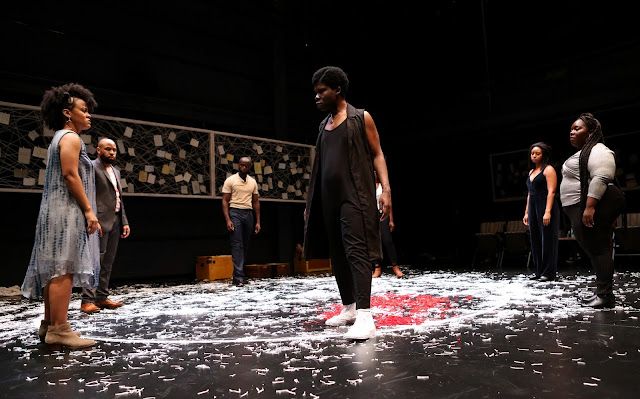 Meanwhile, inside the auditorium, as the Black folks stood in a circle, we looked each other in the eyes and followed call and response chants with affirming adjectives like “You beautiful Black people” and “You fly Black people,” followed by a boisterous, collective chant of "Yeah!”

In this moment, we celebrated and supported each other. The energy was palpable and high vibration. This ritual reinforced that we as a Black community need to lean on each other in these difficult times. No matter what slings and arrows literally come our way, we must remember that we are a proud and powerful people, and we’re stronger together.  What we sent up was a tearful eulogy for our brothers and sisters who are not here. May they rest in power.  What we sent up was our hope and prayers for those of us who are still here.  May we transcend and keep on shining.

What to Send Up When It Goes Down will also have a staging at Playwrights Horizons in the fall.