June 08, 2019
I recently saw Rocketman and it’s fantastic -- packed with dynamic acting, singing and dancing. A poignant story point that also stuck with me was the unconditional love shared by Elton John and his songwriting partner and best friend, Bernie Taupin.
“We’ve never had an argument,” Elton John said of his longtime friend.
I’m proud I can say the same about my best friend, Cindy. Even though we’ve taken different paths in life, during the course of our thirty-five year friendship we have never had anything more than a minor disagreement, and we remain each other’s biggest supporters. 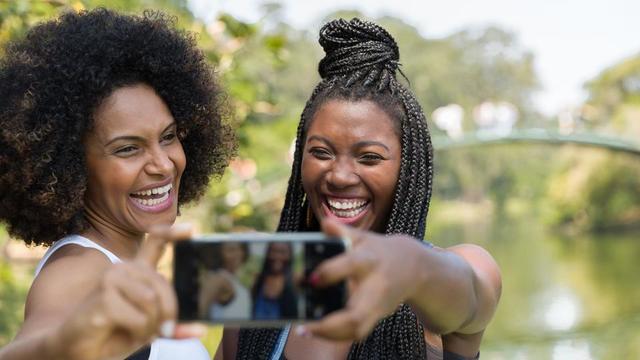 We entered Howard University in D.C. together, but Cindy transferred after one semester. She has three kids, I have none. In a full circle career twist she became principal of our high school. I make a living as a freelance writer. She never left our hometown in Baltimore, and I moved to the bright lights of New York City 25 years ago.
Yet, despite the physical distance we have remained close. A few years ago, I took her on a press trip to the Caribbean for a "BFF Girls Getaway." And for mini escapes from her principal and parenting priorities, she visits me at least once a year. On those occasions, we've gone to Broadway matinees (Ain't Too Proud was the latest), ice skating in Bryant Park and even ventured to the Bronx for a Yankees game.
Although we don’t talk or text weekly, I cherish spending time with her face to face whenever I come home to Baltimore to visit my parents. Since I don’t drive, and Cindy has been skillfully behind the wheel since we were seniors in high school, with a honk to signal her arrival she still scoops me up for a trip to the mall, movies and out to eat (sometimes all three), usually with her tween and teen daughters either asleep or with their faces buried in their smartphones in the back seat.

“Hey Tray,” she says with a sweet smile.
“Hey Cin,” I respond, as we greet each other with a hug and a kiss on the cheek.
In the car, Cindy pumps up the radio and we sing along with nostalgic Top 40 jams from our youth like Sade’s “The Sweetest Taboo” and Journey’s “Don’t Stop Believing.”

School Days
I’ve known Cindy since we were in seventh grade homeroom together. My Mom and Cindy’s Aunt are great friends who taught at the same elementary school. So when they found out Cindy and I were at the same junior high school, they played matchmaker.
Whereas Cindy comes from a big family with four older siblings, I’m an only child. During my adolescence I was shy, anxious and had trouble asking for things I needed, whether it was going to my local drugstore to pick up school supplies or ordering a Happy Meal at McDonald’s. And one time I remember asking Mom to call Cindy to get a homework assignment I missed when I was out sick.
“I thought that was weird,” she later told me with a laugh.
Cindy was naturally pretty with shoulder length brown hair, but not conceited. In junior high school, she had braces and always dressed tomboy cool with hoop earrings, a jean jacket and sneakers.
If I had to name a celebrity she resembles, I’d say she’s part of the Irene Cara tribe, fitting since she sang Cara’s “Out Here on My Own” from Fame in a talent show.
Even though my personality was more reserved, I’ve always taken risks with fashion. In high school, I traded the more conservative Ann Taylor tops, skirts and blazers I wore in junior high for funkier new wave and preppy wardrobe staples like wildly patterned Esprit and Generra shirts, pink and green Izod cardigans and overpriced Benetton tees. And by senior year, I was more confident in my own natural beauty thanks to a little Clinique makeup, Guess jeans and fresh bob haircut.

The Edge of Heaven
When we entered high school, Cindy and I were still pals but she was besties with one of her neighborhood girlfriends. And I had become buddies with another awkward black girl I met in chemistry class.
But one day I noticed that Cindy’s locker, like mine, was plastered with photos of WHAM! The photos of George Michael and Andrew Ridgeley with their spray tans, impossibly white teeth and Ocean Pacific (Op) short shorts were a conversation starter, and we chatted about how dreamy the duo was, and other Brit pop bands we enjoyed like Tears for Fears, Duran Duran and Culture Club.
Based on our shared music interests, the beginning of sophomore year, I asked Cindy to go see WHAM! in concert.  My Mom and cousin chaperoned us at the Philadelphia show.
The hot and hazy day of the show -- September 8, 1985 to be exact -- our mutual hysterical fan frenzy cemented our BFF status.
“Shake it, sexy!” we yelled at the top of our lungs as the show opened with a carefully coiffed George Michael sashaying across the stage to “Everything She Wants.”
My cousin and my Mom looked at us like we were possessed as we shrieked, shimmied and sprinted up and down the outdoor stadium aisles the entire two-hour show, sweat pouring down our smile-locked faces.
The concert was all Cindy and I could talk about during the 90-minute car ride home and for weeks afterward. And junior year we were roommates on the class trip to Europe, where we bought George Michael's single "A Different Corner" at HMV in London and sang the song a cappella before we feel asleep. Decades later, the WHAM! concert and that European trip are still highlights of our friendship.

Turn a different corner, and we never would have met!
This past Christmas I even bought us matching “WHAM! Last Christmas” t-shirts. Before Cindy could get a chance to rock hers, however, she caught her youngest daughter wearing it to school – the same high school where we were fangirls for George and Andrew.
We Are Family

Cue Kenny Rogers….through the years we have been there through our respective ups and downs.

I watched her receive her Masters degree and slapped her a hi-five as she walked by. I was one of her bridesmaids and honored to have her as my maid of honor. I visited her Dad before he passed  away and she and her husband and kids were there to celebrate my Dad’s 80th birthday surprise party.

A couple summers ago, her oldest child visited me in New York with his girlfriend and I played tour guide. I remember like it was yesterday when he was an energetic, mop-topped adolescent taking off his shirt in the Giant supermarket, boasting “I can fight!” Now he’s a handsome young man.

I am super proud of all of Cindy’s creative and well-mannered kids, whom I love like they’re my own. We are family. They call me Aunt Tracy, and I enjoy spoiling them with little gifts.

While I’m grateful for all of my close friendships, not many have been as seamless and as full of joy as my bond with Cindy. And as I’ve watched other sister friends come and go, I’m glad that we’re still part of the fabric and soundtrack of each other’s lives.