New Year, New Me: Taking Time in Nature for Self-Care

January 15, 2019
I’m a city girl. But year after year the daily concrete grind – weaving in and out of foot traffic set to an ear ringing soundtrack of honking horns and piercing police, fire truck and ambulance sirens – wears me down.
“I’m walking here!”
So at least once a year I escape the skyscraper cluttered skyline into nature -- be it to the mystical desert out West or an exotic beach locale with tranquil blue water.  This year, I'm tempted to venture on a snowbound excursion (not my usual choice of climate) to Quebec.
One nature girl getaway that stands out was a solo trip to Southern Utah. Yes, Mormon country. 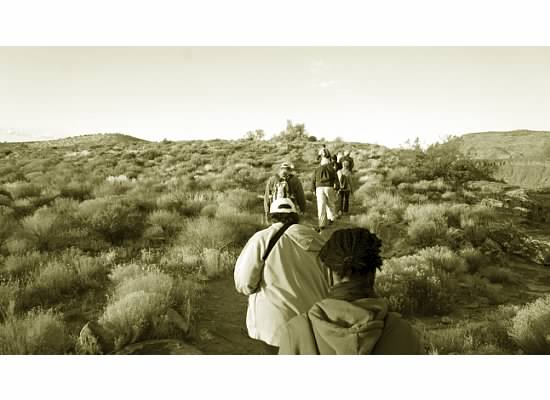 After a girlfriend raved about her solo excursion to Red Mountain Resort in St. George, Utah, I booked my trip. At the time, my web content job had become tedious and my coworkers were working my last nerve.
Although diversity is normally a consideration for me when I travel, this time I threw caution to the wind. I desperately needed a change of scenery.
“Are there black people in Utah?” an African American airport security guard inquired when I asked him for directions to the shuttle that would take me from Las Vegas to Red Mountain.
“I don’t know. But I’m going,” I replied with a determined smile.
Sure enough, during my weeklong stay I don’t recall seeing many, if any, other black folks. And while it would have been nice to connect with another woman of color, I was so captivated by the awe-inspiring landscape that I didn’t feel like the odd sister out.
“This is America, untouched,” I thought to myself as I looked up at the clear blue skies and red mountain peaks.
At orientation to familiarize guests with the campus-like resort’s sprawling layout, I struck up a conversation with an older white couple.  They had a timeshare and a car.
“We’re going into town later to catch a movie. Would you like to join us?” they asked.
Perhaps they were concerned that as a black woman traveling alone I would feel isolated, or more than likely they were just being nice. I appreciated the invitation, but declined. As an only child, I actually enjoy my own company. Plus, there was more than enough activity to keep me occupied.
Each morning I would request a 6:00 a.m. wakeup call in order to make the 7 a.m. guided morning hikes through the rugged red rock cliffs and canyons in the nearby Snow Canyon State Park. These early bird hikes were a highlight. On one hike, I even became friendly with another woman vacationing solo.
This getaway took place during American Idol’s heyday and the highly anticipated second season finale with Clay Aiken and Ruben Studdard aired during my trip.
“Who do you think will win?” she asked.  “I hope Ruben does.” And when the Velvet Teddy Bear prevailed by a slim margin, becoming the second season American Idol winner, my hiking buddy left me a congratulatory voicemail. 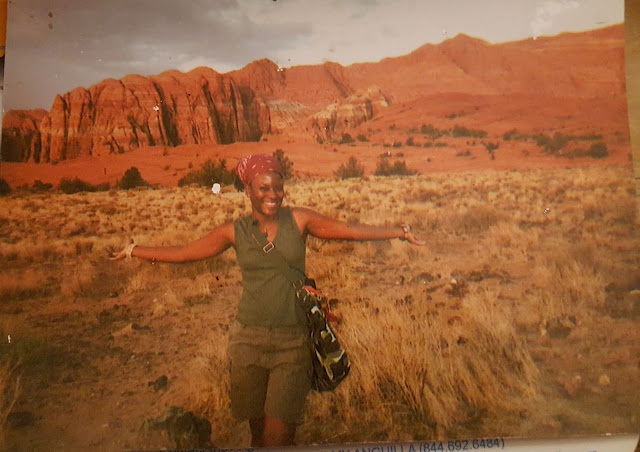 During my time in Utah, I blossomed like a desert flower.
Along with the daily hikes, I took fitness classes, treated myself to a facial and savored three nutritious and delicious meals a day.
Breakfast and lunch were served buffet style and the calorie-conscious menu consisted of wholesome, fresh fare like steel cut oatmeal, cooked to order omelets, fresh fruit, veggie soups, salads and lean protein, plus a yummy chocolate chip cookie for a treat.
The experience was so rejuvenating that I returned a few years later with my husband. We spent eight days, seven nights in the arid desert heat.
We took the morning hikes together, a memory we still treasure.  Literally helping each other climb during a hike is a physical reinforcement of how well we work together. We’re a team. That’s easy to forget when you’re sweating the small stuff like whose turn it is to unload the dishwasher or take out the garbage.
As fate would have it, on one of those hikes we met two black women from Philly on a girlfriend getaway.
With shared smiles we acknowledged to each other, “It’s nice to see you here.”
Like a Fresh Air Fund kid, being in nature has a restorative effect on me. Away from the distractions of deadlines and the sensory overload stressors of city life, nature elevates my mood. I feel more centered and focused on the present moment.
“You look genuinely happy,” my Dad said when he saw a photo from my first Red Mountain trip.
And I was.
If money weren’t an object, I would have a vacation home with a mountain or ocean view.  But until that daydream becomes a reality, I’ll continue to take nature girl retreats, with and without my husband.
To remind me daily of why I need to take time to explore the great outdoors, that snapshot of me beaming with my arms outstretched over a majestic red mountain backdrop is pinned to my home office cork board.