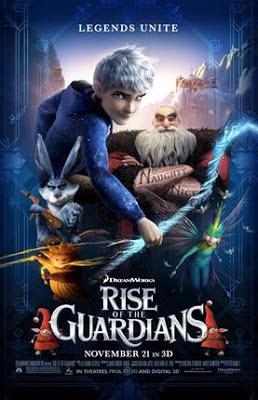 To help you get into the true holiday spirit, Everything She Wants is offering four lucky New York City residents or visitors the chance to win complimentary movie passes to see DreamWorks' Rise of the Guardians (passes are good for you and a guest, and are valid at any Manhattan Regal Cinema).

With an all-star cast including Alec Baldwin, Hugh Jackman, Isla Fisher and Chris Pine, Rise of the Guardians is an epic adventure that tells the story of a group of heroes – each with extraordinary abilities.
In a culture that places tremendous value on the popular holiday legends of Santa Claus and the Easter Bunny, Rise of the Guardians provides a glimpse behind the veil and into the deeper meaning of these magical heroes. Though lighthearted and exciting, the film also concerns the serious subjects of prayer, purity, guardian angels and spiritual warfare, which ultimately gets to the true meaning of life itself. Thus, the film provides an experience that parents, grandparents, teachers and faith-based organizations will want to use to convey important moral lessons.
Here's how to win:
The giveaway offer ends Tuesday, December 4 at 11:59 p.m. One entry per person, per household.