Beauty News: What it Takes to Make Your Favorite Fragrance

September 06, 2011
Do you know what goes into making your favorite fragrance? Without getting too scientific, the answer is, a lot. Everything She Wants recently participated in the first Fragrance Academy with Aramis and Designer Fragrances and Givaudan Fragrances with a select group of writers and bloggers.

From tuberose to heliotrope, we sniffed our share of savory and floral elements.  Experts in the field refer to the process of making fragrance as "the juice." For their juice, Aramis and Designer Fragrances sources only the finest raw materials and has "a commitment to quality and creativity," says Veronique Gabai-Pinsky, the company's global brand president.

Because they spend less on marketing than their competitors, they emphasize storytelling.

For instance, the story behind the brand's Be Delicious by DKNY was "take a bite out of life," and the scent is infused with the first natural extraction of apple.

"Fragrance is a beautiful craft," adds Gabai-Pinksy.  "[We're] trying to bring back that magic and bring back education to the consumer." 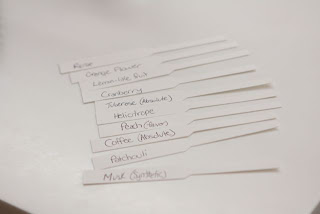 When it comes to developing fragrances, the brand relies on Trudi Loren, senior vice president of corporate fragrance development worldwide for the Estee Lauder Companies.  Loren is known as "the nose" and has worked closely with Sean "Diddy" Combs and Donna Karan to develop their designer fragrances.

Loren also took us through a perfume history lesson: the Greeks made the first perfume, a rich, waxy substance offered to the gods; the first perfume for personal use was made during the Roman Empire; Cleopatra was the first to use perfume as a weapon of seduction; and Napoleon used perfume to disguise his poor hygiene.

Similarly, during Queen Elizabeth's reign she had public spaces scented with fragrance to mask the stench of her people.

The birth of contemporary fragrance came with the launch of Chanel No. 5 in 1921; the creation of Miss Dior in 1947 became the link between fragrance and fashion; and in 1953, Estee Lauder's scent Youth Dew "became an intrinsic part of American culture."

The second half of the day was spent touring Givaudan's New York City office.  The company has a prestigious perfumery school and develops 130 of the world's more cherished perfumes in addition to laundry care and household fragrances.  In Givaudan's experimental lab, a robotic assembly line called "Roxanne" is loaded with 300 of the most commonly used materials and does 2,000 - 3,000 pours a day.  Givaudan's lab completed 42,000 trials of perfume in 2010.

March 15, 2021
April is Stress Awareness Month .  But strategies to reduce and manage stress are welcome any time of the year.   Studies show that women are more likely  than  men to report high levels of stress, and for African American women  chronic or daily stress is even more problematic.  While we tend to think of approaching stress management from an emotional wellbeing and physical health standpoint, we don't often associate making  dietary  changes with reducing stress and anxiety.   While scheduling an appointment with your  primary  care doctor and seeking help  from a therapist or spiritual advisor may still be necessary to help address the underlying reasons for why you're feeling stressed and the degree to which your  stress  affects your life, here are a few food for thought tips from  Constance Brown-Riggs, MSEd, RDN, CDCES, CDN, nutrition consultant and author Diabetes Guide to Enjoying Foods of the World .  Swap your  morning  coffee with a cup of warm tea .   “The key to
Post a Comment
Read more