Lost in Antigua: From Sugar Ridge to Halcyon Cove

July 20, 2010
You know how nothing on the TV show “Lost” was coincidental? Well, I had a “Lost” moment on my recent vacation on the Caribbean island of Antigua.


One night while my husband and I lounged in our mosquito-covered canopy bed at the luxe boutique hotel, Sugar Ridge, we came across a local hotel beauty pageant on the tele.


The Ms. Rex pageant included five contestants representing two Antiguan Rex Resorts -- Hawskbill and Halcyon Cove.  The pageant seemed like a throwback from the ‘80s and reminded me of the “Miss Black America” pageant from that era.


The flamboyant Ms. Rex host was a bald, bow-tied black man who spoke with a dramatic, “Showtime at the Apollo”-reminiscent delivery and stressed that the contestants speak with “clarity.”


The winner, Donella Loncke, wore a sparkly blue gown and had a certain twinkle in her eye. I picked her as the winner before she was crowned.  We found the pageant amusing.


Little did we know, the next night we would literally become a captive audience at a Rex resort. After our flight on Delta was unceremoniously cancelled due to mechanical problems, Antigua’s less than courteous Delta crew informed us we would be put up for the night.


When we arrived at the Halcyon Cove, it dawned on us that this was the hotel from the pageant, and there was nothing amusing about it.  This was certainly no Sugar Ridge, and the staff certainly wouldn’t win a Miss Congeniality prize.

Our room reeked of mildew, had a lock that was partially unhinged, and the WiFi was intermittent.  I know I sound like a Yankee brat, but this was not the best way for Delta to make amends for their inconvenience. On a more positive note, the hotel was right on the beach which allowed us to take another dip in the calm, baby blue Caribbean sea. 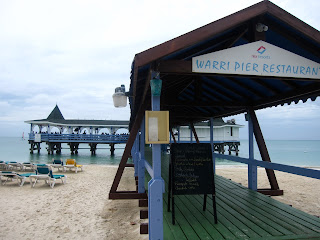 The highlight, however, of our impromptu stay at the Halcyon Cove was the local celebrity we spotted.  Bussing tables at the hotel’s beachside eatery, Warri Pier, was none other than Anne Marie Phillip, Ms. Warri Pier from the Ms. Rex pageant.  Anne’s solemn demeanor changed when my husband greeted her with her pageant title.  She also beamed when I asked her to pose for a photo.

The buffet lunch at the Warri Pier was nothing fancy, but not bad.  The seagulls sure like it.  In the evening, we ate at Halcyon’s more formal dining room, Arawak Terrace. Alas, no sight of Ms. Rex runner-up, Ms. Arawak Terrace.