HSN Gets Twiggy With It: Fashion Icon's Line Debuts April 3 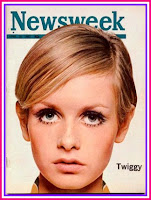 Those doe-like eyes.  That signature haircut. Twiggy was the poster child for London's '60s mod scene.  Now the fashion icon is bringing her Boho Brit style to HSN, with the debut of Twiggy London on Saturday, April 3.

Yesterday, I chatted with the gracious supermodel and got a sneak peek at her collection at the Bryant Park Hotel.

Twiggy said she was inspired to make an accessible collection by her longtime friend Barbara Hulanicki, who opened the popular London department store, Biba, in the '60s. Instead of haute couture, Hulanicki focused on affordable designs inspired by London street fashion.

Similarly, everything in Twiggy's HSN collection is under $100.

"Fashion is for everyone," says Twiggy.  "We should all be able to wear great clothes." 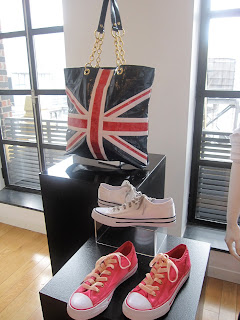 Standout items include Satin Sneakers with velvet shoelaces in a choice of white, hot pink, black, or cobalt ($39.90); a funky Union Jack tote in black, navy, hot pink, pistachio, or chocolate ($79.90); and Suede Open-Toe Pumps with a wearable heel in raspberry, black, or navy ($49.00).

Young Americans, however, may be more familiar with Twiggy from her five cycles as a cheery judge on "America's Next Top Model."

"Girls have it much tougher today than when I broke in," she admits.  She adds that the cast was "lovely" and describes Tyra as "a gorgeous, clever girl."

No matter what role she's playing --  model, wife, Mom (her daughter Carly Lawson is a designer for Stella McCartney and crafted a pretty floral print scarf for the HSN collection), Broadway actress, or designer -- Twiggy is always a class act.